The Jolliest Client Ever 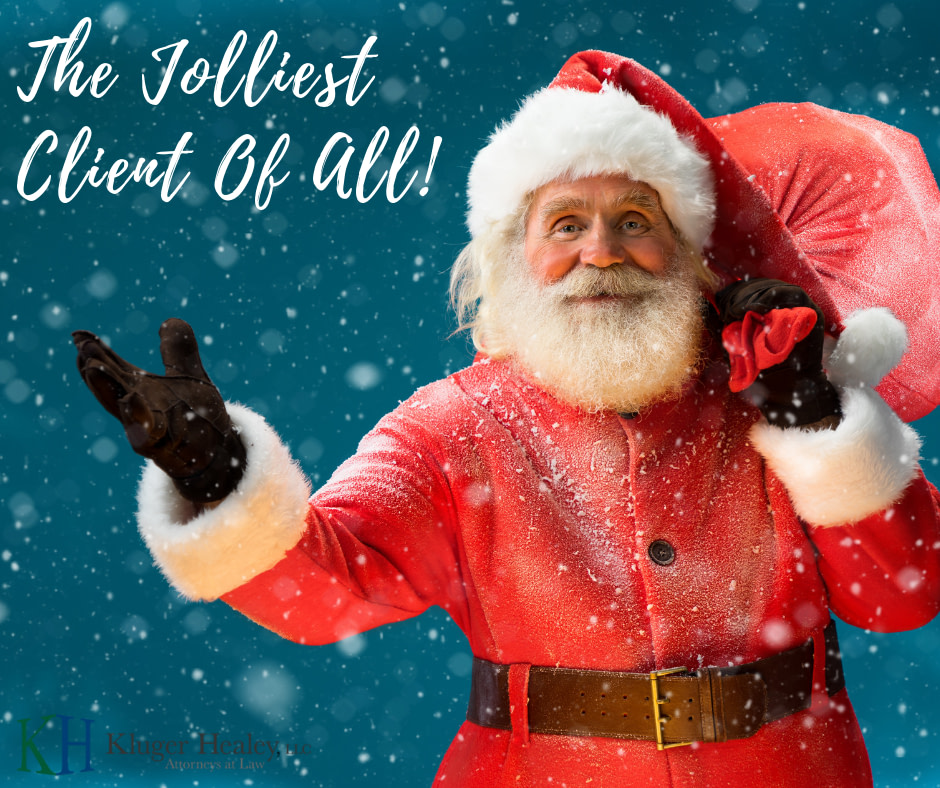 ‘Twas almost the night before Christmas (or whatever holiday you celebrate, unless you are agnostic in which case we hope we did not offend you and please skip to the next verse without prejudice), when all through the courthouse, not a creature was stirring, not even a louse (of a Plaintiff with a frivolous suit);

The stockings were hung by the chimney with care (and by stockings we do not mean a woman’s garment previously worn on her legs in yesteryear but no longer in fashion this year) in the hopes that St. Nick would soon be there;

while visions of new costly employment laws danced in their heads;

When up on the roof we heard such a loud clatter,

we sprung from our desks to see what was the matter;

We looked out the window and all appeared peaceful and misty,

but that thud on the roof was so loud, we thought it might be Chris Christie;

But alas no, we have a new sheriff in town

who seems intent on bringing all businesses down;

When what to our wondering eyes did appear, but a miniature sleigh and eight tiny reindeer with a little old driver  (which is merely descriptive and does not reflect any age or size animus), so lively and quick, we knew in a moment it must be St. Nick;

And he whistled and shouted (at the Reindeer, not the women on the street….that would be 3rd party harassment) and called them by name: Now Dasher! now Dancer (no, not the kind of dancer you had at your holiday party) now Prancer (yeah that’s not good either) now Vixen (seriously? they’re getting worse), on Comet, on Cupid (not in the office please) on Donner and Blitzen (whew those two are clean);

As we drew in our heads, and were turning around, down the chimney St. Nicholas came with a bound; He was covered in soot and dressed all in fur, from his head to his foot (not that there’s anything wrong with dressing like that if it makes him feel comfortable with who he is);

We gasped, Santa what brings you to our humble law office on Christmas Eve and so late?

Oh boys, the white bearded gent exclaimed, it is my employee handbook, I fear it’s out of date;

You know I work those Elves so hard that I’m afraid they might be forming a Union,

and by the way Bill, I see you’ve been on the Naughty List since right after your Holy Communion;

We told our venerable guest that we’d clean the soot from his suit and not to fear,

that we’d fix his handbook in the time it takes to feed the Reindeer;

So Santa got comfortable in a borrowed Kimono,

as we assured him not to worry about cost, we’d do it all pro bono;

So through the ancient handbook we began to stroll,

good thing we’re both admitted to practice in the North Pole;

We told Santa that his handbook was missing some serious pieces

and he’d have to do more than just give his Elves some wage increases;

Santa, we said, there are so many new employment laws just this year

there’s even one making a protected class of your Reindeer;

And here in Jersey we have this new Gender Equity Pay Law;

to which the jolly old saint let out a giant guffaw;

What, Santa bellowed, pay the girl Elves the same as the boys,

is that true  even if they don’t make the same number of toys?

We must tell you that there’s even more  you won’t like St. Nick,

we said, the Elves are entitled to 5 days of pay, even if they call out sick;

This makes no sense Santa responded, how can I fill the workshop shelves

if there’s no one to do the work of those sneezy, sniffley Elves?

Well what else could these Jersey lawmakers have in store,

I really want to keep my summer workshop down the shore;

Up  at the North Pole I have a lot of juice,

but I really like spending my summers living near Bruce;

Oh Santa, we said, it looks like next year we  still won’t get a reprieve,

those legislators are now talking about even more paid family leave;

Santa looked mad and exclaimed, under his tree this Phil Murphy is getting nothing but coal

and it looks like I may need to summer at the South Pole;

Then he said with a smile, Ho, ho, ho, about all these new laws you boys must be joking,

No Santa, we answered, but just wait til next year, on your sleigh you’ll likely be toking;

With reminders to schedule his harassment and diversity training to boot,

He sprang to his sleigh, to his 4-legged employees gave a whistle,

And away they all flew like the down of a thistle.

But we heard him exclaim, ere he drove out of sight—

“Happy Christmas, Feliz Navidad, or Happy Holidays or whatever,  to all, and to all a good night!”