Keeping Up With The Cuomos: New Jersey’s New But Not So Minimum Wage 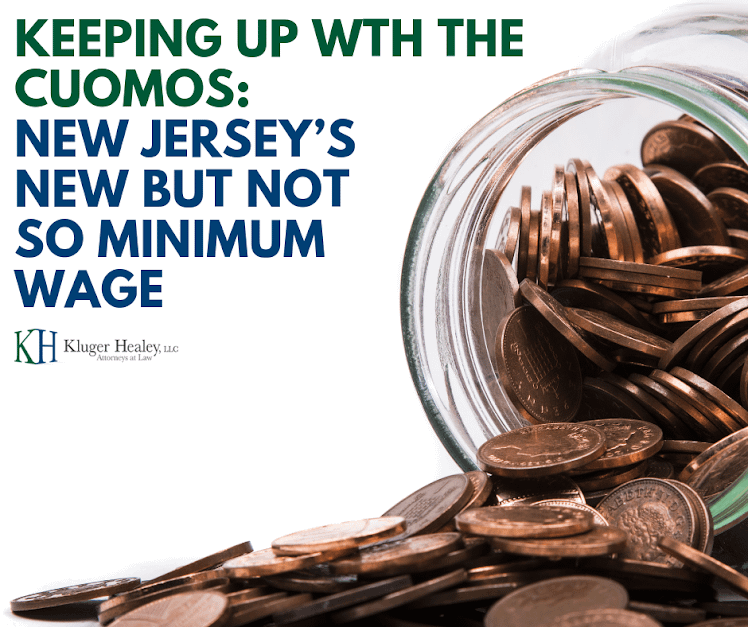 In an effort to maintain his Progressive street cred,  Phil Murphy recently signed an amendment to New Jersey’s minimum wage law that will see a jump from the current $8.85 to $15.00 an hour by 2024 for most workers. New Jersey now joins California, Massachusetts and New York in the effort to drive small business elsewhere. The crazy thing is that the minimum wage just increased to $8.85 last month and the first increase of the new law will be on July 1, 2019, jumping a $1.15 to $10.00, making the total increase $1.40 an hour in 2019 alone.

After the first increase, the next will be January 1, 2020 and then each January 1 for each of the 4 that follow. Those increases will be the greater of the federal Consumer Price Index or $1.00. So this is how it looks:

Although the law appears to lengthen the phase-in for small businesses, the real joke is the definition of small business. Maybe this is Murph’s effort to not be out-progressived by the governor across the river, but get this, a small business is one with only 5 or fewer employees. A small business in NYS is twice that size.  So congratulations Mom and Pop…you and your 6 employees are now a big business in New Jersey, right up there with Wakefern and its 35,000, UPS and its 19,000, and Verizon and its 15,000 employees.

Even those with 5 or fewer employees will only be behind the rest by 2 years with the following phase in:

This slower phase-in also applies to seasonal employees who are defined in the new law as those who work only between May 1 and September 30. So clearly this includes camp counselors and summer interns. We take care of our own lawns, but if you have a landscaper, you’d better get a rake and lots of leaf bags because nobody but you is taking care of your lawn after September 30, at least not until 2026.

It seems that Murph may have another motive for raising the minimum wage based on his own economic woes. Our multi-millionaire governor might just need a good paying side hustle (https://tinyurl.com/y6kll5cc) because it has recently been reported that his $175,000 a year government salary isn’t enough to even pay the real estate taxes on his Middletown mansion (https://tinyurl.com/yymrswro), to which we say: #poorphil.

So what’s next on the hit parade? Coming soon to the Garden State: an expansion of the Family Leave Insurance program from 6 to 12 weeks, and if that’s not enough, the NJFLA will be available to employees in companies with 30 or more employees down from 50.  NJ sure is keeping up with the Cuomos.