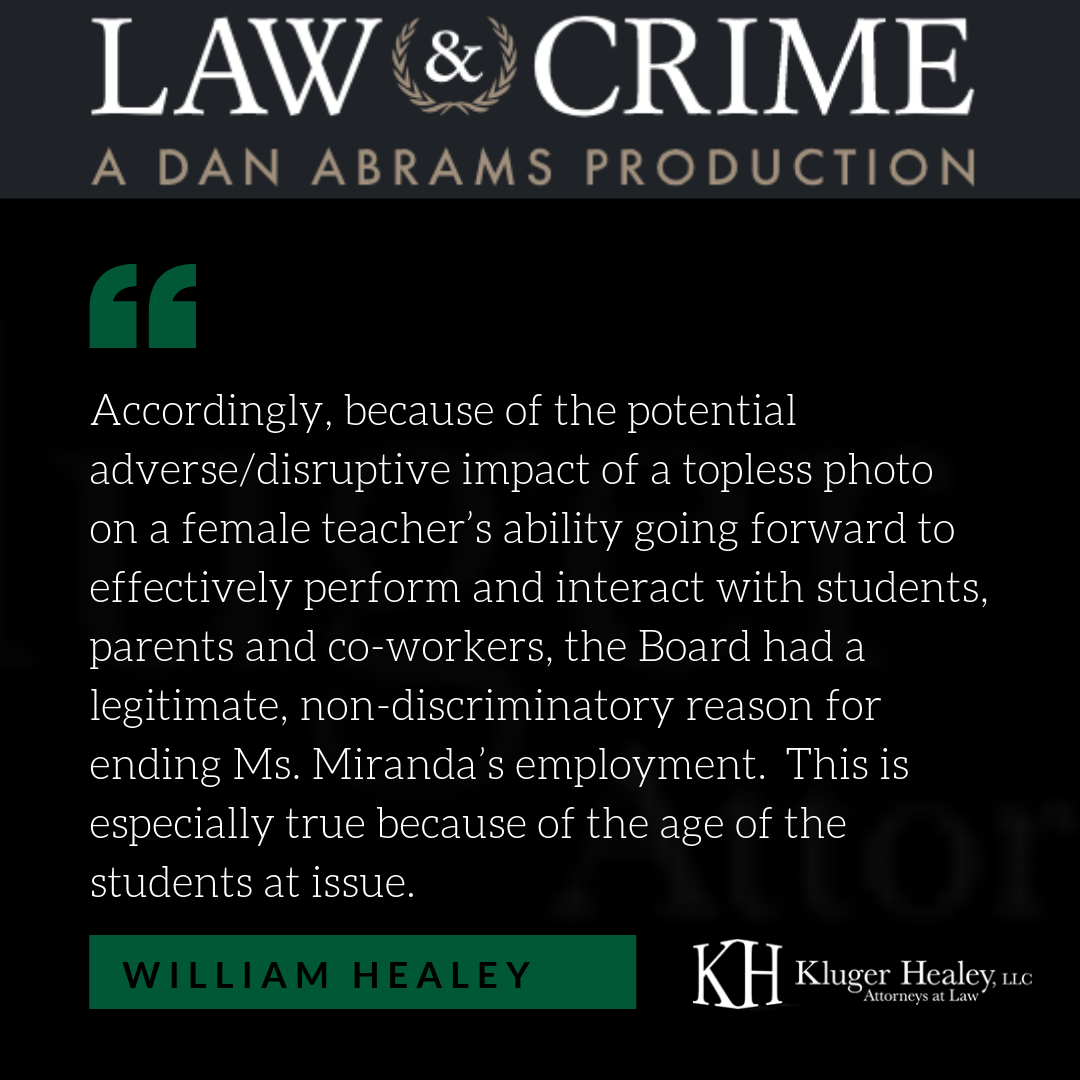 Teacher Lauren Miranda just sued her local school district, and it sure sounds like her lawyer would rather make headlines than win a verdict. The 25-year-old middle school math teacher made a classic error in judgment: while in a romantic relationship with a fellow teacher, she sent her partner a topless selfie. Somehow, that picture made its way into the hands of a male student, and all hell broke loose.

At first blush, this is one of those situations that seems disturbingly unfair.

“My career has been ruined, my reputation has been tarnished, I have been stigmatized,” Miranda lamented during a press conference on Monday. “Everything I have worked so hard for since I was 18 years old has been stolen from me because of one innocuous selfie.” And it does seem harsh: a dedicated teacher lost her job when her private photos were shared without her permission. Miranda’s attorney, John Ray, argues that the district’s policy is “backward” and reinforces antiquated ideas about women’s bodies.

It’s easy to get caught up in what’s-the-big-deal-ism here. An adult sending a topless photo to a consenting partner hardly seems unforgivable. However, there are a couple of problems with that logic. First (and in my opinion, foremost), middle-school teachers are charged with educating our kids as to proper use of digital media. In 2019, the dangers of nude selfies are a bigger part of the curriculum than are the times-tables.

Students (beginning early in elementary school) are taught that the internet is a dangerous place in which images lurk eternal, that they can and will face consequences ranging from school discipline to criminal prosecution if they distribute naked images in any way, and that poor digital choices can lead to life-crushing consequences. It seems to me that the district is simply practicing what it preaches. And I don’t say that out of some Puritanical hatred for nakedness. If the district found that when Miranda was off the clock, she couldn’t accurately calculate the perimeter of a square, it’d be well within its rights to fire her; this is no different.

Law&Crime spoke with attorney and employment expert William Healey, who agreed that the district likely has a solid defense on its hands:

Accordingly, because of the potential adverse/disruptive impact of a topless photo on a female teacher’s ability going forward to effectively perform and interact with students, parents and co-workers, the Board had a legitimate, non-discriminatory reason for ending Ms. Miranda’s employment.  This is especially true because of the age of the students at issue.

Miranda might still have a good lawsuit on her hands against her ex (if she could prove that the once-private photo was intentionally publicized) – but so long as the district exercises its role-model policy equitably, she should probably pipe down.

More ridiculous than claims of unfairness, though, is the narrative that Miranda’s attorney is peddling: that his client was not only treated unfairly, but that she has actually been the victim of discrimination. “What’s the problem with the picture?” Ray asked the Washington Post. “When you look at it, and compare it with a man’s picture, there’s no problem. The only distinction is that her nipples can suckle children, and his can’t.”

Really? Women’s bare breasts are the same as men’s? I think Victoria’s Secret and anyone else living in reality would beg to differ. However unfair it all may be, women’s breasts have been sexualized for centuries. Pretending that the differences don’t exist or don’t matter does not score points for feminism.

Dress codes, including those upheld time and again by federal and state courts, regularly require women to cover bare breasts (except during breastfeeding) while making no similar requirement of men. Generally, this has meant that dress codes cannot be significantly more burdensome on one gender than the other – but not that they need to be identical. There is no law declaring that men and women are the same – only requirement that they be treated equally.

Ms. Miranda’s gender discrimination claim ignores unmistakable anatomical differences between men and women. This is easily seen by the fact that the male student surely would not have taken any action had he somehow discovered a topless photo of a male teacher.  Like it or not, a photo of a topless female teacher is still a “bigger deal” in our society—it just is (indeed, this story would not exist otherwise). In a different environment, involving only adults, a finding of gender discrimination may be more likely.  Context matters.

Ms. Miranda should turn her focus on the former boyfriend, the student and whomever else appears to have violated her privacy/trust and ultimately tortiously interfered with her contractual relationship with the school, thereby causing her economic and other damage.