Doing Dubies During the Day: What Does Recreational Pot Mean for the Workplace? 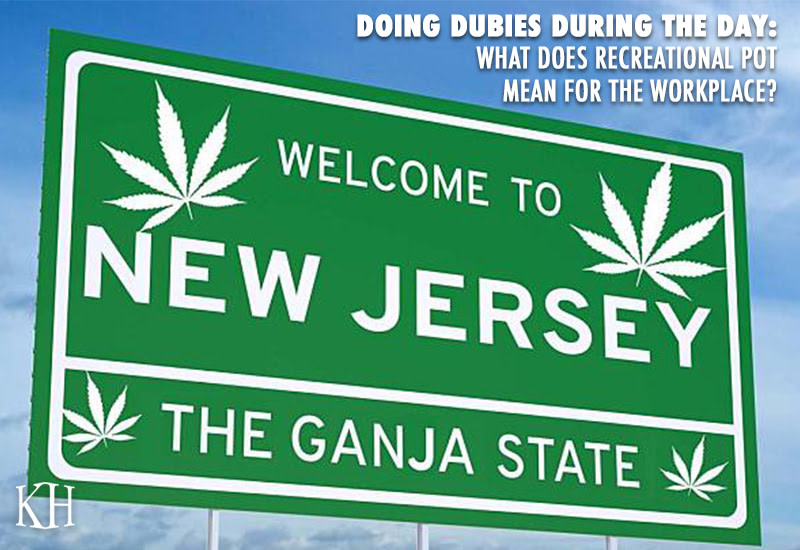 One of our avid readers writes in and asks:

Yo dudes, like Phil and those other jokers tokers from the legislature finally got it together! Man they have been so harshing my buzz since like November when the people spoke. Power to the people! So like now I have a really important question: Can we be like taking toking breaks (get it?)in front of the building like those other people who just take nicotine, for whatever that does for them? Oh, can my boss still make me pee in a cup (you know for like a drug test) ‘cause I don’t want to get busted?

– Space Cowboy Bob formerly-known as Bob from Accounting
(and some people call me Maurice).

Calm down there Space Cowboy. Just because you can drink coffee at work doesn’t mean you can do tequila shots there, does it? You should think of the legalization of recreational marijuana the same way. We already know from NJ’s medical marijuana law that employers can’t fire someone solely because they use prescribed marijuana. Employers must determine whether they can reasonably accommodate an employee who uses the stuff. What that means Bob, is that if they operate heavy equipment, like your spaceship for example, accommodation might not fly, but your Slide Rule is likely safe to use even if you’ve ingested marijuana. The same kind of deal applies now that recreational marijuana is legal. Employers need to decide if someone can safely work with the weed in their system.

Last week, Murph signed the laws that establish the legal framework for the new Cannabis industry. He also put in play laws that decriminalize pot and hash and establish penalties for those under 21who use, which will no doubt be as effective as the laws that do such a fine job preventing youngsters from drinking before their 21st birthdays. But the impact of the new laws on employers is different.

Just like the 1991 NJ law protecting tobacco smokers, employers now cannot fire, refuse to hire or treat an employee differently just because they are potheads, as our parents used to call them. Of course, many of those potheads are now CEOs, General Counsel, EVPs of HR, and hedge fund fat cats. Ok, but check this out—NJ employers also cannot refuse to hire based on a conviction for: Manufacturing, distributing, or dispensing, or possessing or having under control with intent to manufacture, distribute, or dispense, marijuana or hashish. This even includes those convicted of dealing within 1,000 feet of a school or 500 feet of a public park.

Pump the breaks. You read that right. It’s one thing to have to hire the burnouts (what we used to call them), but it’s another to be required to hire their dealers (now known as Cannabis entrepreneurs). But that’s the deal.

And yes Bob, your boss can still make you pee in a cup. Drug testing pre-employment, post-accident, and on reasonable suspicion based on observable signs of impairment is still permitted. But here’s the problem. The new law prohibits adverse employment action solely because the employee tests pot positive. Unlike alcohol, which metabolizes quickly (we have heard), THC can remain detectable in a test for up to 30 days in those who partake regularly (we have been told). So testing positive won’t provide definitive proof that an employee is impaired. Employers need to consider whether to continue drug testing and those who do, need to think about whether it is even worth having marijuana on the test panel, at least for pre-hire testing.

Before abandoning testing, it is important to recognize that substance abuse, whether it is alcohol, prescription or illegal drugs, remains a serious problem nationally and for employers. According to data recently released by the National Safety Council and the University of Chicago, untreated substance use disorders (SUD) have risen 30% in just three years. Employers spend an average of $8,817 annually on each employee with an untreated SUD. Sadly, that same study found that 1 in 12 employees suffers from an SUD. Preliminary information has shown that the pandemic has made things worse. More easily accessible recreational marijuana will likely have some impact on the workplace.

What to do? The new NJ law says that before an employer can take any adverse action against the employee, not only must the testing of either blood, urine, or saliva come back positive, but a physical evaluation must be performed by a Cannabis Regulatory Commission Certified Workplace Impairment Recognition Expert.  Wait, what? Who are these people? Where do they come from? Will they be known as CRCCWIREs? Can Space Cowboy Bob be certified? And seriously, what do they really need to know? Mellow, glassy-eyed and ate all the donuts in the breakroom. Done. Now we’re all certified.

The other wild card in all of this remains that marijuana is still an illegal, Schedule I drug under federal criminal law. That sure does make an employers’ approach in Jersey a bit dicey, or does it? One thing we know for sure, employers need a plan and a policy. We can help.