Were the Pilgrims Independent Contractors? 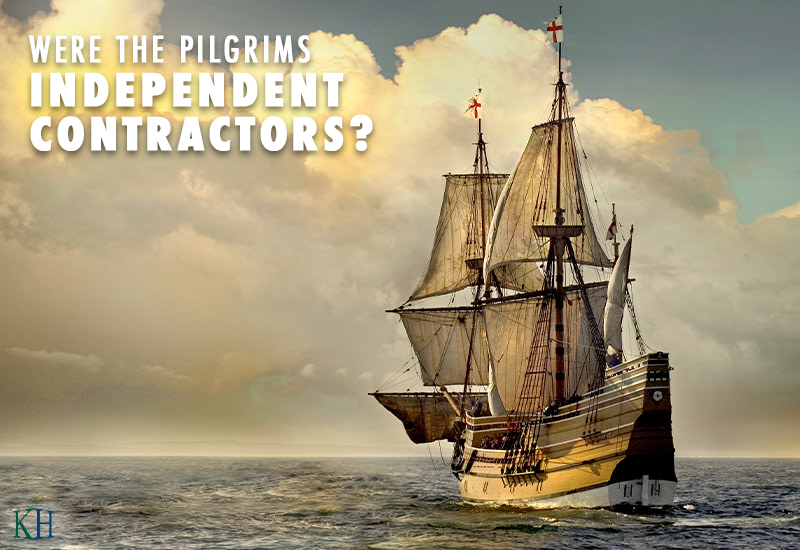 Surely you remember back in elementary school when you prepared for the annual Thanksgiving pageant, making Pilgrim and Indian (if you’re our age), Native American (if you’re a bit younger) and now Indigenous People costumes, and your teacher would invariably gather the class and ask the age-old question: Were the Pilgrims misclassified as independent contractors?

While you may think we jest, do you really believe a small group of religious separatists had the coin to buy a couple of serious ships and enough provisions to travel across the pond and establish a colony? No way. So they made a deal with the Company of Merchant Adventurers, a London investment group. The deal was that the company would pay for shipping and supply the colonists with tools, clothing and other supplies in exchange for which the colonists would work for the company, sending natural resources like fish, timber, and furs back to England. All assets, including the land and the Pilgrims’ houses, would belong to the company until the end of seven years.

Had the Mayflower landed a bit further south, like on the rocks of NJ, the yet to be invented IRS and NJDOL would surely have proclaimed the colonists employees and assessed the Merchant Adventurers for back payroll taxes, FICA contributions, Unemployment, and Temporary Disability Insurance contributions and some corn. And if King Phillip of Murphy has his way, those businesses that misclassify workers as IC’s will soon end up under Plymouth Rock. Last year, he established a Task Force on Employee Misclassification. This past summer, he signed a law that granted the DOL the authority to assess penalties of $5,000 a day against businesses that misclassify workers and even issue a stop-work order to shut down a business to ensure compliance.

Even more startling though, on November 7, the state Senate began considering a statute that will all but eliminate independent contractors in New Jersey. The draft bill establishes that all workers are deemed employees unless the business can prove the following:

These are the same basic criteria currently applied by the DOL and the courts in evaluating IC status, but the statute draws the lines even more sharply. If the business cannot establish all three criteria, the worker is an employee.

We have always used this very simple example to make clear to our clients how difficult it is to establish independent contractor status. If you are in the advertising business and a pipe bursts, you call a plumber. The plumber is an independent contractor because you don’t set his hours, direct or control his work, supply his tools and he does not do what you do. However, if you need a creative director to work on a project, you will likely tell them what hours to work, give them direction and a laptop and most importantly, that worker does what you do—advertising. So even if the work is temporary or part-time, that individual is a temporary or part-time employee of your advertising agency, not an independent contractor – even if the individual would prefer IC status (as they often do).

If it makes you feel any better, Tisquantum, more commonly known as Squanto, was a consultant to the Pilgrims and truly the New World’s first independent contractor.