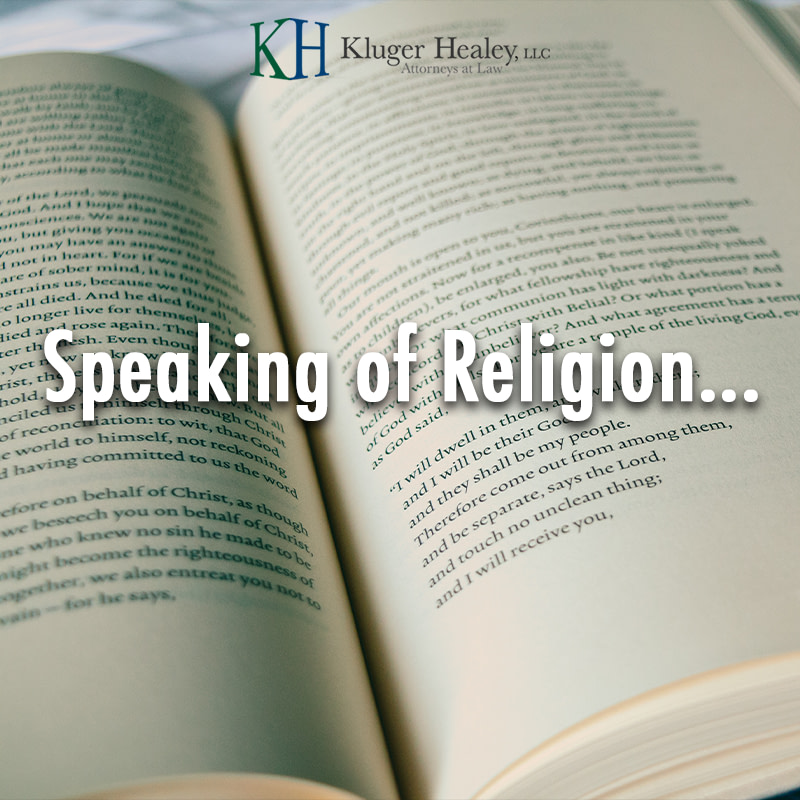 A week after the convergence of Holy Week and Passover we figured you might be missing the gospel. So who better to bring you some old time religion than your always pious employment lawyers? Would you believe often pious? How about occasionally?  Ok, twice year but with feeling.

There are some important recent religious events about which employers should be aware. Last month, the US Supreme Court asked for briefs on a religious accommodation case involving Walgreens and a Seventh Day Adventist employee who claims that he was not exactly working at the Corner of happy and healthy. The story is that the employee celebrated his Sabbath on Saturdays and Walgreens accommodated that religious practice. Even when he was promoted to a position that often required Saturday work, his boss did everything he could to schedule around Saturdays and allowed him to swap with others when his number was up for a Saturday shift. There were a few occasions though when nobody else was available and despite the emergent need, the employee refused to work. As a result, Walgreens asked him to return to his prior position or transfer to another. When he refused those options, Walgreens gave him every day of the week off to practice whatever religion he wanted. He sued, claiming that Walgreens failed to accommodate his religious beliefs. Two lower federal courts though tossed out his suit on the theory that Walgreens offered him accommodations, just not the one that resolved the conflict between his job duties and his religion. The big court in DC may decide whether employers are obligated to make the accommodation that fixes the conflict or if accommodations that work around it are sufficient. Stand by for that decision because it may impact the workplace in unexpected ways.

That decision might be a doozy because while mainstream religions are on the decline in the U.S., we’re seeing an awful lot of new ones making an impact. We’ve already told you about the Church of Body Modification and Pastafarianism, but what about those of us who, like Annie Savoy in Bull Durham, worship in the Church of Baseball. One Phillies fan wore his Phillie Phanatic hat to the DMV in San Diego. When they told him to take it off for his license photo, he said he couldn’t because it was against his religion to remove it. Now let’s remember who we’re dealing with. After all, it was Philadelphia Eagles fans who booed and threw snow balls at Santa Claus when the team wasn’t playing well. True story. Also remember that this DMV is located  in Cali, so anything goes and the nice lady behind the counter simply told the fanatic to write down something that expressed his sincerely held religious belief (although she didn’t use those fancy lawyer words). So he wrote: I am required by my religion to wear this specific religious head garb in my picture. And snap, she took his picture, Phanatic hat and all. Now we’re not saying that the right kind of prayer can make a difference in sports, but the Phils did win the Bryce Harper jackpot this off-season. Just sayin.

But this isn’t just about our belief in the power of balls and strikes, although there are truly 108 stitches in a baseball and 108 beads in the Buddhist and Hindu mala prayer necklaces. We shared that story because on April 9, 2019, the NYS Senate unanimously passed the Religious Attire bill (talk about burying the lead) which the Assembly passed earlier in the year, although that version is called the Religious Garb bill. Attire, Garb, Tomato, Tomato. Yeah that only works out loud.

Anyway, the new law prohibits employers from imposing any terms or conditions that would require an employee to violate or forego a sincerely held religious practice including, the wearing of any attire, clothing, or facial hair in accordance with the requirements of his or her religion. Think about how broadly that law is worded and the potential implications. And just hope that you don’t employ any members of the 7 Line Army who might insist that their religion requires them to come to work in this religious garb or attire.