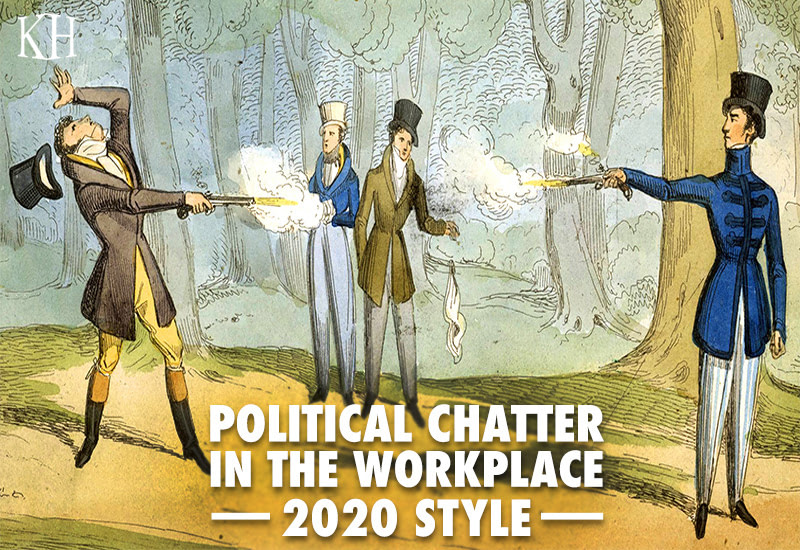 Four years ago, during the Presidential election campaign, we told employers to limit or prohibit political chatter at work in order to maintain civility and productivity. We felt it particularly important 4 years ago because that election seemed to have created more than the usual divisiveness in this country. We were also concerned that the ramifications of support for or opposition to the first female presidential candidate had the potential to lead to gender-related issues that could morph into discrimination claims.  Fortunately, over the last 4 years, those tensions have disappeared, the country has healed and come together, and political discourse this election year has returned to the good old days, reminiscent of the Lincoln Douglas debates. And then we woke up from our Utopian dream and we’ve got Hamilton and Burr dueling 6 feet apart with bulletproof Plexiglas. Can’t wait for that musical!

Last year, more than 40% of workers told SHRM they engaged in political disagreements at work and almost 60% said that political talk among co-workers is more prevalent than 4 years ago. The lines though between candidate preference and social issues have become blurred and passions are high. Who knew that pandemic policy would be a partisan issue? The good news is that this year there are fewer people in the office to go at it, but that doesn’t mean the potential for co-worker political antagonism is any less likely. In fact, there may be even more opportunities for passive aggressive ways for employees to rile up each other. For example, internal Zoom meetings, with their, you just have to wear clothes from the waist up dress codes, can result in red or blue team tee shirts, hats or signs in the background or even virtual backgrounds supporting a ticket.

Until recently, we were relatively comfortable giving the advice that because the First Amendment does not protect free speech rights in private sector workplaces, employers should just outright prohibit political discussion at work.  No decorating of cubicles, buttons, or other political swag. Done. Case closed. See you in 4 years. But that was before the Millennials and Gen-Z stormed the workplace gates and started saying, ok Boomer to our old edicts. In the last 4 years, we’ve seen the employee and consumer-driven  #MeToo movement, the Google walk out, the firing of employees that participated in the Charlottesville rally, Walmart employees protesting gun sales, Wayfair employees protesting sales to immigrant detention centers, and the significant employee/corporate responses to the Black Lives Matter movement.

A SHRM survey found that 75% of all employees and 82% of Millennials believe they have the right to speak out against their employers’ position on social issues. Employment policies that seek to stifle political discussion at work may not be so in vogue this year, and you all know that we at KH always try to keep up with the trends. But remember, the balance of power that saw employees driving employers to take socially responsible positions was no doubt aided in part by low unemployment and the extreme competition for talent. That balance may have shifted somewhat given the pandemic’s impact on the economy. Remaining employed may now be more in vogue. In fact, in a recent Glassdoor/Harris poll, 67% of employees said they’d apply to work at a company that actively supports a political party different from their own. The tech industry, which has been the scene of significant employee activism and employer responsiveness, may now be experiencing a shift back. At least one Cryptocurrency player, Coinbase, recently imposed restrictions on political discussion at work, announcing that the internal conflicts have harmed productivity and mission focus at tech giants like Facebook and Google and more importantly, according to the CEO, employees want the workplace to be a refuge from the division that is increasingly present in the world. Who knows, maybe he’s right that work will be the place to go to get away from it all. How ironic is that? The CEO offered severance to any employee who isn’t comfortable with the no politics at work policy.

Despite these conflicting views, we still think politics and work are a toxic combination and should be discouraged (the politics part that is). In fact, another survey (last one, we promise) found that 24% of Republican employees and 23% of Democrat employees do not want to work with a co-worker who plans to vote for the presidential candidate they don’t support. That ain’t likely to promote a healthy or productive work environment.

We recommend making it known, by policy and/or any means necessary, that work communication tools, including the old ones like cell phones and email, and the new ones like Slack, Google Hangouts, and Zoom, cannot be used to promote an employee’s political agenda, whether it be about a candidate or social issue. The rules should also include an apolitical dress code and background for any video meetings. If that’s not enough, employers can even dust off those old non-solicitation policies buried somewhere in the employee handbook designed to keep out union organizers and Girl Scouts selling cookies and enforce them against those peddling politics.