Out, Out Damn Harasser: Placido Hits the Low Notes 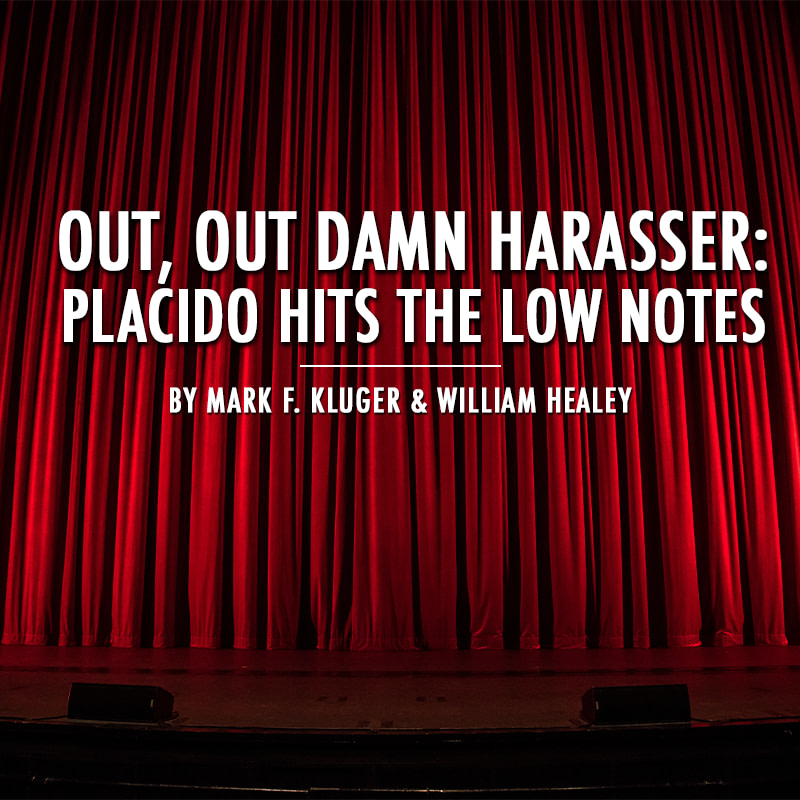 Act I, Scene I: If you are among the cultured elite, you already know that a few weeks ago, the Metropolitan Opera Company removed opera star Placido Domingo from its production of Macbeth because of sexual harassment allegations made by some higher pitched opera stars. If you are among us, you know that where we come from, the Sopranos have their own way of dealing with harassment – – and it isn’t quite so civilized. Bada Bing!

In August, the AP reported that as many as 20 female opera stars, all but two of whom remain anonymous, accused the 78 year old performer of pressuring them into sexual relationships. Many of the claims emanate from the LA Opera Company, where the megastar not only performs but is the General Director. Almost immediately, the LAOC retained a law firm to conduct an investigation. We think that was a great idea and highly recommend hiring a law firm (or even two) if your lead singer is accused of sexual harassment. The AP story appeared on August 13 and the investigation started on September 17. By the way, Gen Z—Macbeth is a play not a new Apple product.

Act I, Scene II: Placido bellowed back that the allegations from these unnamed individuals dating back as many as 30 years are deeply troubling and as presented, inaccurate. In other words, it’s a tale told by an idiot, full of sound and fury, signifying nothing (Macbeth Act V, Scene V, See Shakespeare For Dummies pg. 6). And so, with the late September opening fast approaching and with no allegations from its own employees, the Met announced it would wait until the LA investigation concluded before deciding the old crooner’s fate. You know, that innocent until proven guilty nonsense. But that’s not how it goes these days.

Act II, Scene I: In mid-September, NPR reported that it had interviewed Met staffers and a number of longtime employees at the opera house…are furious that the New York company is continuing its association with Domingo. One employee is quoted as saying, I feel queasy in the pit during rehearsals, seeing him onstage. We thought she meant the pit of her stomach, but it turns out these opera houses have some kind of pits in them. Strange, right?

After the final dress rehearsal on September 21, the Met’s General Manager (no, not Brodie Van Wagenen), responding to the NPR story, reiterated to the cast that because there had been no formal complaints  at the Met and the allegations in the AP piece lacked corroboration, the show would go on. Placido, who incidentally goes both ways….Tenor and Baritone (omg get your heads out of the gutter), didn’t help his cause when he told NPR, I believed that all of my interactions and relationships were always welcomed and consensual. After that admission, Placido should probably look for more than just a new opera house before his wife of 50 years goes all Lady Macbeth on him.

Act II, Scene II: NPR also reported that “[a] current member of the Met orchestra described feeling angered upon seeing an HR representative carry anti-sexual harassment training materials into a rehearsal room at the opera house, after rehearsal had ended and Domingo had left.” Hey, calm down orchestra member because if you had been reading these alerts regularly, you’d know that the HR representative had no choice because the deadline for all NYS employers to conduct sexual harassment training for its regular employees and opera stars is October 9th….that’s right…just days away. If you haven’t done it yet, it’s time to raise the curtain and get the orchestra out of the pit and let’s do some training. And if you miss the deadline, don’t worry, we’ll still do the training and we won’t tell.

So we have now taken you from the Museum of Sex all the way to the Metropolitan Opera House to convince you of the importance of conducting sexual harassment training and to show you just how cultured two employment lawyers from Jerzy can be, you know with all this museum and opera talk.

Epilogue: On September 24, only days after giving Domingo a vote of confidence, under mounting pressure, the Met disinvited the larger than life Macbeth from the role, likely ending his career at the iconic opera house. On October 2, Domingo resigned as General Director of the LA Opera. The curtain falls.