#OMG: Is Sexual Harassment Really Not Allowed Even In The Museum Of Sex? 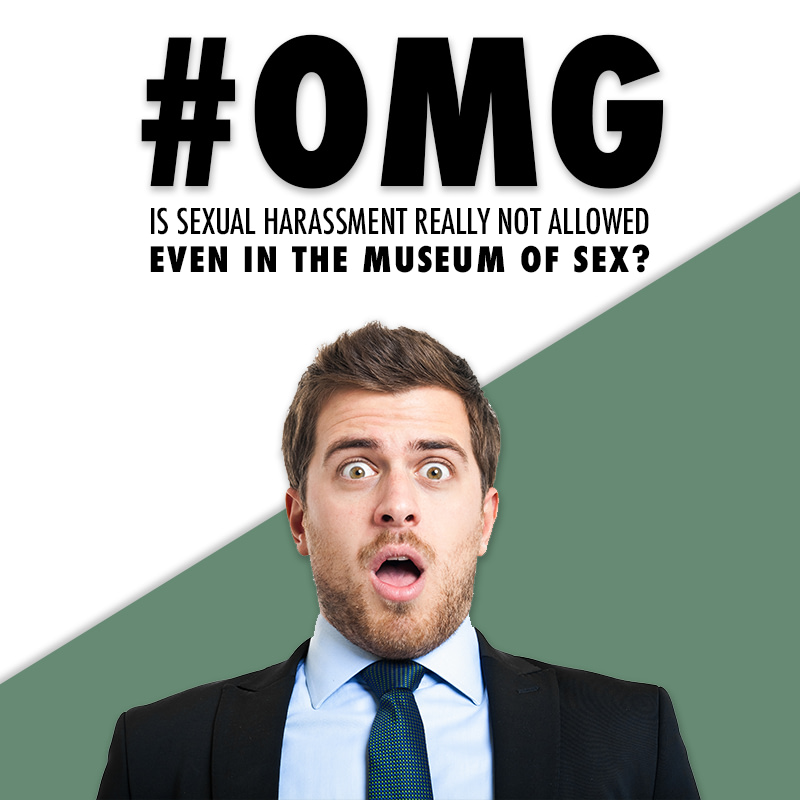 On June 19, 2019, a former employee of the NYC Museum of Sex filed a lawsuit for, you guessed it — sexual harassment. What is the world coming to? Is no place safe anymore? Among the former tour guide’s allegations are that the museum patrons engaged in “utterly inappropriate sexual language” and groped employees. Okay, we’re against the groping part, but how can there be such a thing as “inappropriate sexual language” in a sex museum? We’re not big museum guys, but when we go to the dinosaur museum, we engage in dinosaur talk. Some might even say, “utterly inappropriate dinosaur talk.” This claim is like the librarian suing the library because the patrons are engaging in literary talk.

Another example in the former museum tour guide’s lawsuit is an October 2018 incident in which two visitors asked her if they could have sex in the bouncy boob house (a phrase we never thought we’d use in one of our scholarly works), which is part of the Funland: Pleasures & Perils of the Erotic Playground exhibit, consisting of …..wait for it….that’s right, inflatable breasts on which visitors can jump and frolic in a pit. When the guide humorlessly responded that sex in public is illegal, they asked if they could spank her–which offended her. Working around inflatable boobs, not so much. Apparently, being able to deflect comments from estrogen and testosterone crazed people is not part of the job description.

Sometimes context matter. At least it used to. In our line of work, for example, we have been forced to study Hooters (eyes up here…we mean the restaurant chain). Over the years, Hooters has had its share of sexual harassment claims, but the ones that stuck involved inappropriate behavior toward the scantily clad waitresses by managers, not patrons. Insulation from liability because of customer behavior is in part likely due to the waiver that Hooters’ Girls have reportedly been required to sign, which states: “I hereby acknowledge…the Hooters concept is based on female sex appeal and the work environment is one in which joking and innuendo based on female sex appeal is commonplace.” See, you learned something right there—Hooters is a concept. And the nearly identical statement is provided to employees at the similarly themed Dallas based chain Twin Peaks(no joke). The point is that the waitresses essentially consent to the inane sexual banter by the fat, middle-aged drunk guys who go to Hooters for the exceptional wings and who previously bought Playboy for the articles. So, you would expect that a lawsuit for sexual harassment based on customers’ behavior in a workplace where sex is part of the gig (so long as not physical) would not fly, right? Well, those days may soon be over. Just two months ago, a New Jersey appellate court overturned a 3-year-old lower court’s dismissal of the Borgata Babes sexual harassment case. The now 11-year-old case, which may finally be heading to trial, emanates from the casino’s personal appearance standards for the cocktail slinging Babes.

Here’s a pretty big development: Social media campaigns have fueled public opinion and rapidly led to political pressure resulting in statutory changes to sexual harassment laws in some states and revisions to policies and enforcement procedures among employers. The legislative changes began with laws barring arbitration of sexual harassment claims and confidentiality provisions in settlement agreements. An increasing number of states then started adopting mandatory sexual harassment training laws, including California, Connecticut, Delaware, Maine, and New York State (NYC too). In fact, all New York State, employers must have completed sexual harassment training for all employees no later than October 9, 2019. Yikes….isn’t that deadline coming up soon….like right after the summer? Bet a lot of employers are right about now looking for a dynamic, engaging, interactive sexual harassment training program that their employees will actually enjoy while at the same time learning and absorbing the material required by the state law. We might know just where they can find such a program (CLICK HERE).

But, an even more tectonic shift in the law of sexual harassment is right around the corner. The decades-old legal standard that requires behavior of a sexual nature to be severe or pervasive in order to create a claim may soon be coming to an end.  If (or when) that happens, it will be much easier for employees making harassment claims to win, at least under state laws. Of course, California is already there and New York is about to lower the standard as soon as Prince Andrew signs a recently passed bill. More on these life-altering new standards in our next post.  To deal with these seismic changes, employers – every one of them – better make sure that they have an effective sexual harassment policy, complaint procedure, monitoring mechanism, and periodic training.

Meanwhile, back in the Museum of Sex, the former tour guide’s lawsuit alleges that she suffers post-traumatic stress disorder, paranoia, anxiety, and depression. It’s no wonder; she probably has nightmares about being chased by giant inflatable boobs. #Occupationalhazard.