Love Is In The Air: So Close The Windows! 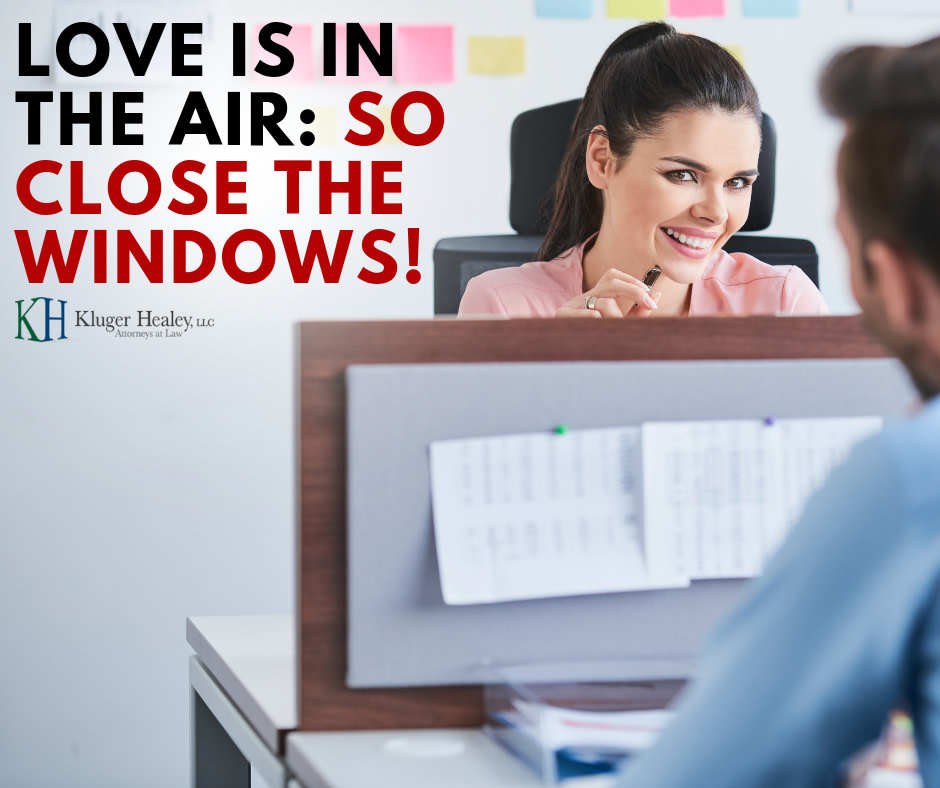 Tomorrow is Valentine’s Day and office romance is becoming like a withering rose according to a Harris Poll finding that only 36% of employees dated a co-worker in 2017. And this makes us sad because despite what you might think, we’re true romantics. In fact, we even love work-related rom-coms with happy endings, you know, like Fatal Attraction.

The trend driving employees away from co-workers and into the arms of strangers might be the ongoing career self-destruction that’s being played out almost daily in mainstream and social media.  Pew Research recently revealed that #MeToo is tweeted an average of 55,000 times a day, meaning that the public remains laser focused on workplace sexual harassment. The Vox list of celebrities, politicians and CEOs who have been credibly implicated since December 2017 is up to 263, and employers continue to publicize their own harassment purges, including Google’s recent admission that it fired 48 employees for the offense in the last 2 years. The fear of being embroiled in a workplace scandal may be enough incentive for employees to look for love outside the office but let’s also not forget that some of this trend might just be attributable to online dating.

Before you think we’re going to pour cold water on Valentine’s Day, we believe it’s important to recognize that office romance is not synonymous with sexual harassment. Although a Yougov.com survey found that 17% of women 18 to 29 believe that being asked out at work is harassment, it is not (at least not once). In fact, 66% of Americans say it’s perfectly acceptable. Remember, about a third of co-worker relationships end in marriage, some even happy ones. When MacKenzie graduated from Princeton, she worked at an investment firm and her office was next to Jeff Bezos’. In 2013, she told Vogue, “all day long I listened to that fabulous laugh….How could you not fall in love with that laugh?” Now who’s laughing Jeff?

Last week, Bridgewater Associates, the world’s largest hedge fund management firm, fired its head of foreign exchange research because he failed to disclose a relationship with a co-worker who did not report to him. She was fired for the same reason. Relationships with co-workers are not prohibited by Bridgewater’s policy, but failing to disclose them is taken very seriously.  While we agree that such a policy is the right approach, we do wish they showed some mercy for that couple, after all, where else is the head of foreign exchange research going to meet someone?

Outright bans on employee relationships just don’t work. They only force employees to be deceptive. Instead, disclosure policies that include a relationship contract are more practical and provide employers with an opportunity to better protect against sexual harassment claims. These policies require employees to report their consensual relationship and sign a “contract” in which they agree to be conscious of not making co-workers feel icky (like no making out in the stairwell).  The contracts also require the couple to notify HR if the relationship ends so that the employer can help ensure that they can either continue to work in the same environment or find an appropriate solution before the breakup leads to more serious problems.

Disclosure policies are even more critical when it comes to dating between an employee in a management position and one who is not. There is no doubt that when a supervisor is involved with a direct report, someone needs to move. If the relationship ends, whether amicably or not, the potential liability for the manager and the employer remains. The manager is instantly vulnerable to quid pro quo harassment and retaliation claims by their ex, and of sexual favoritism by those who felt the employee had work-related advantages while sleeping with the boss.

But some relationships between superior and subordinate can end well. So on this Valentine’s Day eve, we leave you with these happy endings: Dating the boss worked out well for Melinda. When she was asked out in the company parking lot, she initially said no because she thought dating the CEO was a bad idea. But Bill persisted…..Bill Gates that is. And if first year associate Michelle Robinson had refused the advances of the summer associate who she was responsible for mentoring at her law firm, neither of them might have ended up in the White House. You see, we are romantics.