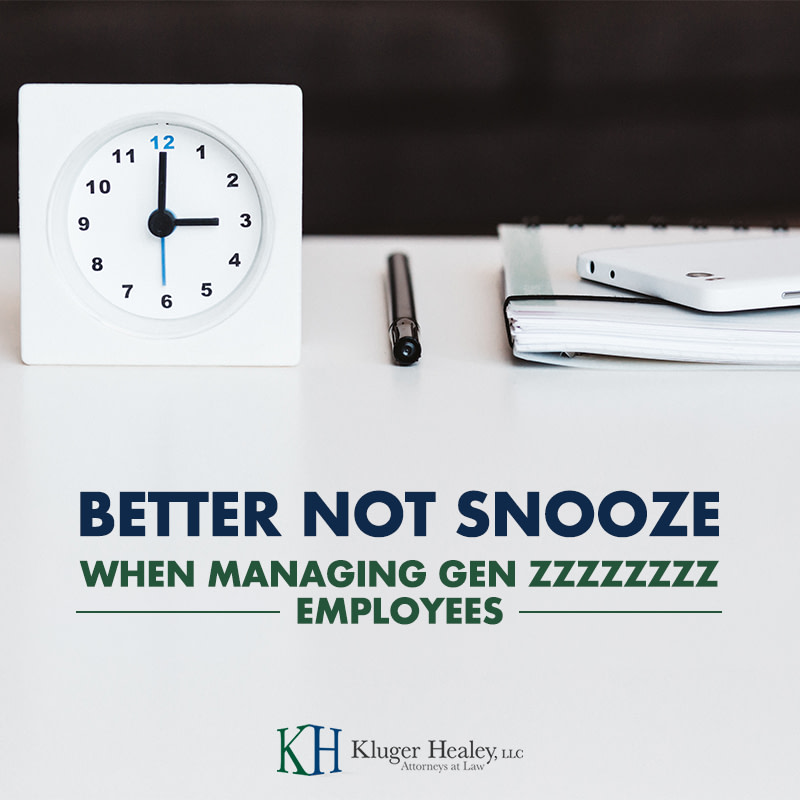 It isn’t going to be easy for us Boomers and Gen-Xers to manage the newest generation to enter the workforce among the 5 we already got. Although those darn Millennials remain the largest segment of the workforce, at 35%, Gen Z, those born after 1995, are the largest generation in the U.S. population, at 26%. So look out, here come the Gen Zers. And we better get ready.

According to Michael Dell, the founder and CEO of the company that, you know, has his name in it, a Dell survey of 12,000 Gen Zers found that they are exceptionally confident in their tech skills (no surprise given that most grew up teething on mommy’s cell phone). As a result, they expect their employers to have top of the line tech available for their use. At the same time though, Gen Zers express anxiety and concern about their serious lack of non-tech communication skills. Again, no surprise, because many of them rarely have an actual conversation and can’t write full sentences or even words. LOL!

What is interesting though, according to Kronos’ Workforce Institute’s June 2019 survey, is that a whopping 75% of Gen Zers prefer in person feedback from their managers, and 39% want face to face team meetings (the latter of which they will outgrow once they’ve had enough of them). Consistent with that finding, as Michael Dell explained, his study found that “rather than shutting themselves away behind technology, they are eager for human interaction.” What kind of human interaction? That’s what concerns us.

Almost 40% of Gen Zers admit to texting naked pictures of themselves according to a July 2019, Singles in America study conducted by Match.com (of course). You didn’t really think we’d make it through the whole piece without a sex harassment angle, did you? So, while our initial reaction was, hold off on company cell phones for those kids, it turns out that 37% of Millennials confessed to sexting, as did 25% of Gen X and 11% of Boomers. Not done. That’s right, 3% of the Greatest Generation (74+ years old) claim that they have sent a naked pic. And can we all say, Ewwww! Although disproportionately, 12% of our seniors say they have received sext messages, proving that sometimes it is far better to receive than to send.

Shockingly (read with sarcasm), more women than men were asked to send nude pics. Although 54% of Gen Z men claim to have been asked for a junk photo, not surprisingly, those numbers sag (sorry) for each successively older generation. If you are out to stop the digital sex craze in your organization, you should know that most of Gen Z prefers to use the Snapchat App for sexting, which means the pic will disappear and you won’t catch them, while 68% of the older generations are more traditional and just text their nudes.

There are two other critically important things that employers need to know about Gen Z. The first is that many of them are children of Gen Xers, the generation most harmed by job loss in the Great Recession starting in 2008. As a result, they believe less in the traditional American Dream than their predecessors, meaning that their loyalties are more to themselves than to an enterprise, making them far more independent and entrepreneurial. Harnessing those characteristics for the benefit of your company means hearing them out when they have new ideas and giving them space to innovate for the benefit of your organization (if you can).

The second important thing to keep in mind is that Gen Z is the most racially/ethnically/culturally diverse generation in American history. Hispanic, African-American, Asian and multi-racial individuals comprise 47% of this new generation of employees. Gen Z will likely be the last majority Caucasian generation in U.S. history. This means, of course, that managers need more than ever to understand how to work with a truly diverse workforce.

Diversity training is a good first step. We can help. BTW, we can also provide instruction on the use of Snapchat.