21 Million Reasons To Do Your Own Damn Dishes On Sundays 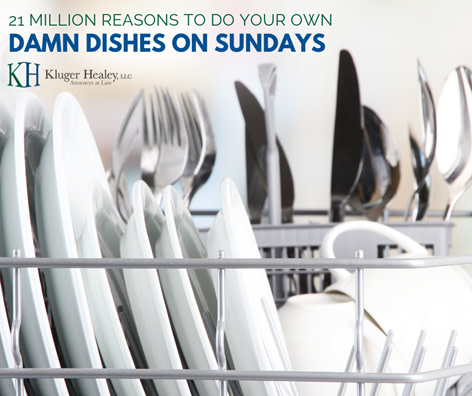 We thought long and hard about whether using the word damn in an article about religion would be sure to punch our ticket down south in the afterlife. Then we realized that our fate’s already sealed (occupational hazard), so what the hell.

Ten years after hiring a member of the Soldiers of Christ Church, knowing that she would not work on Sundays, a fancy Miami hotel fired the devout dishwasher for — you guessed it–refusing to work on Sundays. For 9 years, the hotel accommodated her religious beliefs, but in 2015, one genius kitchen manager, George Colon, decided to mess with the Soldiers of Christ–which from our objective view, sounds like a pretty bad idea, whether for legal reasons or just for purposes of staying on the right side of you know who. And as it turned out, the decision to revoke the dishwasher’s religious accommodation was not just a bad plan, it was illegal and costly. Last week, a federal jury awarded the pious purveyor of clean dishes, $21.5 million. At least we have a kitchen manager all lined up for the future. See you down there George.

Employers are obligated, under federal and many state laws, to provide reasonable accommodations for employees’ sincerely held religious beliefs as long as they do not cause an undue hardship. In terms of who washes the dishes on Sundays, the hotel was in hot soapy water from the outset. The jury just didn’t buy that after 9 years of accommodating the dishwasher’s religious practices, it became a hardship to suddenly do so. Although the verdict reflected that jury’s outrage, the former employee will not be seeing all that green. The award consisted of $500,000 for emotional distress damages, $35,000 in back wages and the rest of the $21.5 million was punitive damages. Because federal law though caps punitive damages at $300,000, the jury was only off by about$20,700,000. So before legal fees, the dishwasher will receive about $500,000. Either way, the final score is still: The Almighty-1 and the Hotel-0.

The fact is that the EEOC and courts typically take a dim view of employers’ failure to accommodate religion. And the issues are often not just about schedules or even traditional religions. A few years ago an Evangelical Christian sued because his employer terminated him for refusing to use the biometric hand scanner to punch in an out. The court determined that the employee had a sincerely held religious belief about the relationship between the hand-scanning technology, the Mark of the Beast and the Antichrist, the details of which, as you all know, can be found in the Book of Revelation.  The thing is that the scanner had a by-pass which could be used for those with disabilities, but the employer chose not to make that option available to the employee who had religious objections. That decision cost the employer $586,860. If the jury wanted to be cute and biblically accurate, they really should have rounded that up to $666,666 (biblical joke….look it up).

Although we have some guidance, courts have studiously avoided specifically defining religion. In determining whether an employee has a legitimate claim for failure to accommodate a non-traditional religious belief, courts often look to whether the so-called religion has a belief system, doctrine, writing and clergy. Take our favorite, the Church of Body Modification for example, which practices body modification to strengthen the bond between mind, body, and soul through rituals that include body piercings, tattoos, hook pulling and other things that hurt. The religion was recognized by courts as legit when Costco fired a cashier for refusing to remove visible piercings, from really uncomfortable looking places, in violation of the store’s dress code.  A different court required a high school to reinstate a Church of Body Modification true believer student, who had been suspended for a nose piercing in violation of the school’s dress code.

Not long ago, one court drew the line over the controversial Pastafarianism, the doctrine of which professes belief that the universe was created by a Flying Spaghetti Monster (“FSM”) as an alternative theory to evolution. A Nebraska inmate sued because the prison would not allow him to have pasta for communion or wear the religion’s traditional pirate costume as religious garb. Interestingly though, some states have permitted members of the FSM Church to wear a colander on their head (FSM religious attire) in official driver’s license photos. Finally, in a 16 page opinion, the federal judge said that the FSM Gospel is satire not religion and denied the inmate’s claim. That took 16 pages? Ironically, the inmate argued that evidence of his sincerely held religious belief included several tattoos proclaiming his faith. He likely would have won had he only joined the Church of Body Modification. There’s always next year.

The moral of this homily: employers must be careful with requests for religious accommodation–and when in doubt and in need of divine intervention, call us..