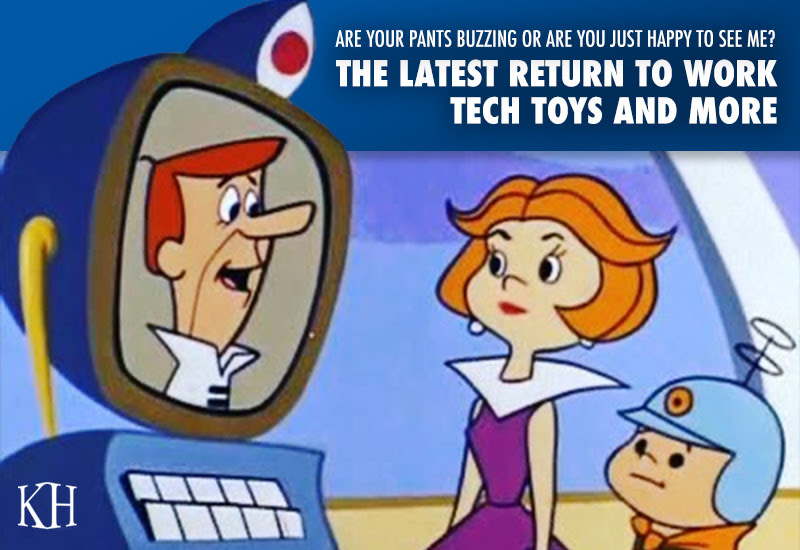 There’s no doubt that technologies like Zoom, Webex, and Microsoft Teams have saved many employers from economic disaster by facilitating remote work. But as states like New Jersey and New York see more employees return to physical locations, the use of technology might play an even greater role in creating an actual or perceived safer work environment.

In the past, you may have been bummed out that your employees were whining on Glassdoor about your lousy 401(k) match or those stale donuts you bring on Fridays, but soon those reviews will be all about what gadgets your competitors have that protect their employees from the virus and how cheap you are for not keeping up. Those other guys have a drone take temperatures in the parking lot before their employees step into a private elevator surrounded by a Far UV light system that kills all potential viral bacteria (and gives them a nice tan), while you stick a thermometer under your employees’ tongues for 3 minutes each morning. You may long for the days when those Glassdoor reviews said you created a hostile work environment as opposed to these guys are trying to kill us. More importantly, the use of certain technologies in the workplace may become the legal standard by which state and federal agencies like OSHA and even the courts judge whether you are doing what’s necessary to protect your employees from known hazards.

Wearables that alert co-workers when they are within 6 feet of each other are among the new technologies being required by employers. One company that makes a bracelet that vibrates and lights up when employees get too close says it provides “a gentle reminder to maintain social distance.” So poor Bob from Accounting is walking down the hall thinking about his spreadsheet when a co-worker unexpectedly turns the corner and boom, they both get tased. Our advice:  if you’re gonna use this technology, better have the defibrillators ready too.

Artificial intelligence (a phrase often used to describe ours) is also playing a significant role in the new safety tech. Symptom checker chatbots, some as simple as the one the CDC has on its website, are being deployed by employers. This morning, Clara from the CDC asked us a series of questions after which she cleared us to go to work. While Clara can easily be fooled, even by us, there is some value to at least checking the box with your employees that they don’t have any symptoms.

Microsoft and UnitedHealth Group teamed up to offer U.S. employers a free App designed to screen employees for symptoms and clear them for work. A Georgia-based company created an AI-enabled survey that combines self-reported information with AI algorithms to identify employee risk for exposure and infection and provides personalized back-to-work guidance. At the end of the daily survey, employees get one of three return-to-work dispositions: cleared to return, medical clearance required, or cannot return to work. The reasoning behind the disposition is shared with the employee and employers may choose to receive a report with or without details. Although the details create a medical record which the employer must maintain in a separate confidential file, just getting the thumbs up or down is not enough information for employers to prevent malingerers.

Facial recognition software to open automatic doors is also being used, although we recommend retina scans instead so that a bunch of mask-wearing employees don’t stand outside all morning wondering why the door won’t open. Employers are also buying voice activation software to be used for everything from turning on the lights and dialing the phone to the dictation of emails to minimize keyboard touches. There are even disinfecting robots running around offices which we seem to think Mr. Hanna and Mr. Barbera thought of years ago, right Rosie? In fact, check out the Zoom call between George Jetson and Mr. Spacely.

AI is even helping to solve the new lunch dilemmas created by the pandemic. In-house cafeterias may be closed or limited to take out.  But take out from anywhere still presents a timing problem. Capacity limitations on elevators and/or lines at limited takeout food options may turn lunch hour into a much longer ordeal. Building management and employers may also limit delivery to minimize additional opportunities for the virus to sneak in. But AI technology may have the answer: meet Chobotics food robot, Sally. Like Rosie, on command, Sally can whip up salads, grain bowls, and yogurt with no human hands or droplets anywhere in sight. Demand for Sally is growing. We are concerned though because rumor has it that, Sally from Food Services has already complained that Bob from Accounting is hitting on her. We’re investigating.

As fall approaches and those little darlings return to the giant Petri dishes that we used to call “school,” and the resulting potential for another surge in COVID cases, what we believe will be the most useful technology for employers might just be contact tracing software. Several months ago, before we were technologically woke, we recommended that employers having in-person meetings keep a list of the date and attendees in case someone contracts the virus so that the employer can warn the rest of the gang. That advice is just so June 2020. Now there’s an App for that. The way it works is that an employer requires all employees to download a Bluetooth/Wi-Fi enabled application. The App runs in the background all day and records each close contact with co-workers. When an employee notifies HR that they have tested positive, HR puts the employee’s ID into a portal which links that person’s name or ID to their phone and then identifies by ID all co-workers that he/she came into contact with over the previous 14 or 21 days depending on a pre-programmed lookback setting.

A contact tracing App developed by PwC decodes the IDs, creating a list of all those who came into contact with the infected employee during the lookback period. The technology rates the level of contact as either high, medium, or low, based on the strength of the signal. For example, if two employees sit in a conference room together, there would be a strong signal and so a higher rating. If employees just pass each other in the hallway, there would be a low signal. HR then notifies all those on the list and either requires or recommends quarantine, self-monitoring, and/or testing based on a pre-determined protocol. Other Apps work on the honor system; HR is not involved. An employee who tests positive anonymously enters that result and the App automatically notifies all those who have had high-risk contact with the individual in the preceding 14 days that they have had such exposure to an unidentified co-worker. HR will obviously need to find out when employees report that they need to quarantine.

Although we think contact tracing is a necessary tool to ensure that employers satisfy their legal obligations to protect employees from known hazards, there are some risks. These Apps could create a false sense of security if they don’t accurately track contacts. Employees with minimal or no exposure may unnecessarily quarantine and those at significant risk may not be informed. We also wonder how often the same employees may have to quarantine. The App says Bob was exposed to an infected co-worker so he’s home for 14 days. He returns and a week later the App says he’s been exposed again. See where we’re going? Bob’s family will break the App. Just as concerning is how to choose the right App. Employers are requiring employees to download new technology to their phones. If the employer chooses the wrong product and the App opens the door to data mining of employees’ personal information, while the App developer may fold up and disappear, the employer that chose the tech may be left vulnerable to significant liability. So choose carefully.

Life was so much simpler for George, Jane, Elroy, and Judy, or at least it was for us when we were just watching them.  All we can say is: Jane, stop this crazy thing!

If you need guidance on creating a safe reopening plan, we’ve worked on plenty of them.