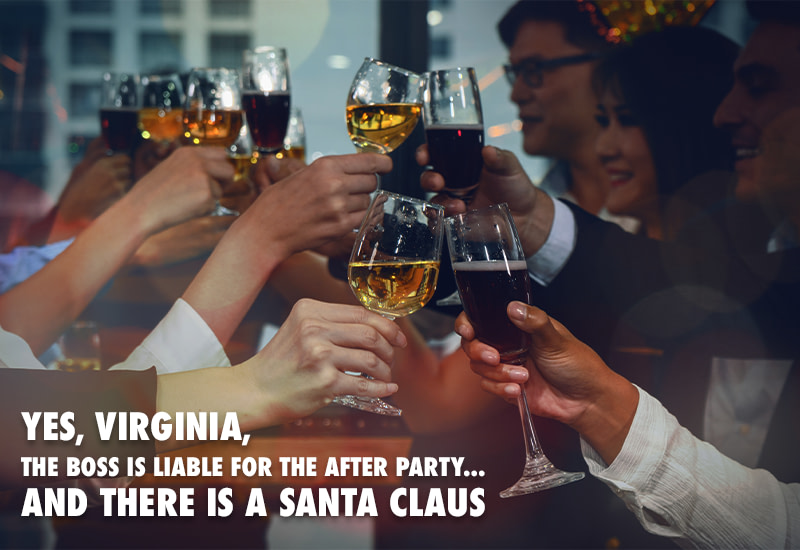 Do you remember torturing substitute teachers? A few standards included switching names, desks, reading groups, whatever it took to ensure we had fun and the sub would never return. Last week, a sub at NYC’s PS 321 got the ultimate revenge. While teaching 1st graders about the power of persuasion, this jerk crushed the little 6-year-olds by telling them that Santa Claus is not real (or so he says). The school immediately fired the loser. On his way out, the Scrooge also took a shot at the Tooth Fairy. No kidding.

So with that sad tale in mind, while we don’t want to chill your holiday party buzz, we will once again try to do everything in our super-lawyer powers to keep you off the real Santa’s Naughty List by making sure that your party isn’t so merry that your 12 days of Christmas will end up being judged by a jury of 12 of your peers.

This season, nearly 76% of employers will have a holiday party, up from 65% last year, according to Challenger Gray’s annual survey. Despite our seemingly drunken annual rants, this year more than 53% of employers plan to serve alcohol. As we like to whine:  alcohol leads to bad behavior and bad behavior leads to #YouTooGetSued. A recent Alcohol.Org survey found that 20% of those asked, admitted to binge drinking at an office holiday party. Not surprisingly, 28% of those bingers work in the legal profession. True story. Interestingly, the CDC defines binge drinking as 4 or more drinks for women and 5 or more for men, leading us to wonder:  Will the gender inequities never end? Maybe someday women will be able to achieve the 5-drink binge status. #Equalbuzzforall!

Just in case you are not a true believer in our gospel though, here’s a tale about the consequences of office party boozing worth heeding (or at least reading). In late October 2019, the EEOC filed a sexual harassment lawsuit in federal court against an employer on behalf of an employee who claims her manager sexually assaulted her at a booze filled holiday after-party. The employee alleges that when her boss first began supervising her, he  asked her to hang out after work, hook up with him, sent her a Facebook friend request, and tried to connect with her on Instagram and Snapchat–all of which she rejected. Several months later, the company had its holiday party after which the manager invited employees back to his hotel room to continue drinking. The employee attended and allegedly texted her boyfriend to pick her up as the after-party began to break up. She contends that the last guest left shortly before her boyfriend arrived and that is when the assault occurred.

In case you are unaware, even if you don’t sponsor or pay for the post-party event, the mere presence of any manager is enough to create liability for you. It is critically important that you inform your managers that they cannot arrange or even show up at an after-party. Even walking by is a bad idea. We know. Humbug to you too! On another note: if you don’t have a policy that prohibits managers from engaging with employees on social media, let us know and we’ll deliver one faster than Amazon Prime.

So while most of you annually ignore our sage advice, we continue to recommend skipping the booze, not because we are unsympathetic to how mind-numbing these events can be without it, but because we care about you all year. If you do serve, we again recommend that you try to limit it. Also keep in mind that beer typically has the lowest alcohol by volume content, while a single shot of tequila or vodka has roughly 8 times as much alcohol. Just saying. We also urge you to find an engaging activity for the party so that drinking and dancing are not the only things to do. You may recall that last year we told you about our holiday hatchet throwing party. And while there are less dangerous activities that can be incorporated into the festivities, let us remind you, Twister is not among them.

This year, though some employers heard our advice as almost 47% of them have chosen to invite spouses/significant others to the party, up from 30% in 2018. We remain convinced, that under the watchful eye of the old ball and chain loved ones, co-workers will be less likely to tease, twerk or touch. And if they do, they’ll get way more progressive discipline at home than you can ever dish out.

Finally, nothing says happy holidays like sending out a memo to all hands reminding them to keep them to themselves during the party and for an extra good time, try attaching the sexual harassment policy and make it clear that you expect everyone to abide. These extra precautions might not stop Bob from Accounting, after his beer, from offering to review Natalie’s figures, but it will definitely help with the defense.

Enjoy the party. Be Safe and call us if things get out of hand or you have leftovers.

And from us to one nasty, hopefully former substitute teacher, we leave you with this classic holiday message:

Yes, VIRGINIA, there is a Santa Claus. He exists as certainly as love and generosity and devotion exist, and you know that they abound and give to your life its highest beauty and joy. Alas! how dreary would be the world if there were no Santa Claus. It would be as dreary as if there were no VIRGINIAS…. A thousand years from now, Virginia, nay, ten times ten thousand years from now, he will continue to make glad the heart of childhood.