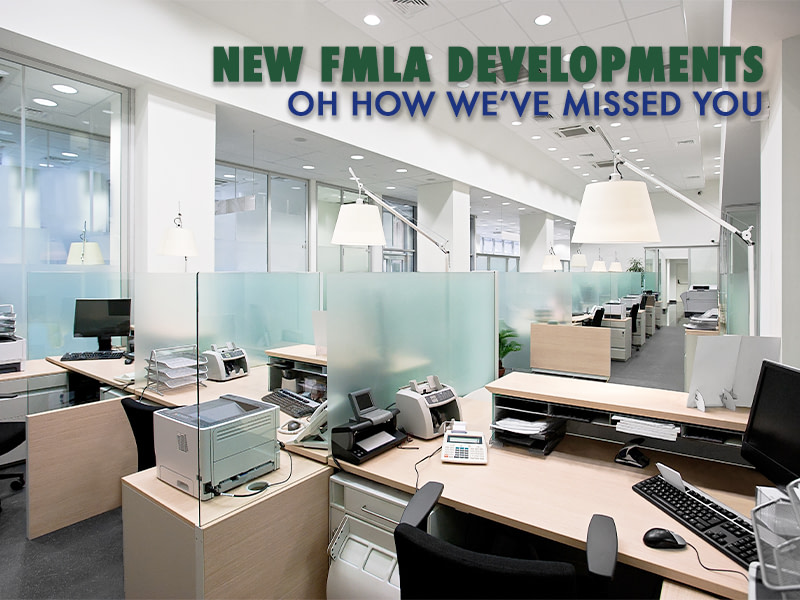 It’s been about 9 months since we last wrote about any new FMLA issues, just long enough for some of you to have a baby and take FMLA leave. And as it turns out, the U.S. Department of Labor has the same gestation period for its Opinion Letters.  We are pleased to announce that on March 14, 2019, the USDOL delivered a beautiful FMLA Opinion letter, 3 pages, 4 footnotes. Opinion and agency are doing fine. And of course, the DOL had an easy Labor. Sorry, had to.

Although the FMLA has been around since 1993, the Opinion Letter addresses important issues that still confuse many employers. The question posed to the DOL from an employer was whether employers can delay designating an absence as covered leave by having an employee use PTO first and starting to count the 12 weeks when that time is exhausted. Why an employer would want to extend the job-protected period is a mystery to us. We will address that issue later because the Opinion nails down an even more important point.

Over the years, we have had employers tell us that an employee is out due to a serious health condition but the employee doesn’t want to use FMLA leave. Our answer has always been, dude it’s not up to them. Just Designate! What we mean is that although FMLA is an employee benefit, designation of leave under the law also starts the clock on that 12 weeks of job protection. So failing to run the time is not to an employer’s advantage. This Opinion confirms our opinion, which by the way, we thought of first. Specifically, it says: Once an eligible employee communicates a need to take leave for an FMLA-qualifying reason, neither the employee nor the employer may decline FMLA protection for that leave. Just like we said! Employees cannot save FMLA for use at another time. So if an employee calls you from the ER and says that they are having a heart attack, are getting stents and need a few days off but please don’t count the time as FMLA leave, the answer is simple: the time off is for a serious health condition and will count against the 12-weeks. Who knows why an employee would make such a request, but we have heard it many times. Maybe they know that later in that rolling 12 months they will need leave time to care for a seriously ill family member. But the regs and this Opinion are clear: it’s not up to them. And more importantly, it is not to your advantage to extend the statutory job protection any longer than required. Once an employer has enough information to confirm that an absence is for a covered reason, the regs require the employer to designate. Use that Designation Notice form.

Now to the other issue. Some employers have policies that require exhaustion of PTO before FMLA kicks in. Those policies also unnecessarily extend job protection and actually conflict with the regulations. The Opinion letter sets that straight too. FMLA allows an employer to require an employee to “substitute” some or all accrued PTO as part of the leave. We recommend that requirement (which must be in a written policy) so that employees do not return from 12 weeks of leave and then tell you about their upcoming 2 week pre-paid trip to Bali. That would be annoying. The regs also say that the term substitute means that the paid leave…will run concurrently with the unpaid FMLA leave. So if an employee has 2 weeks of PTO when they begin FMLA, your policy can and should require that the first 2 weeks burn that time and the next 10 weeks will be unpaid but all of it must be designated as FMLA leave. The Opinion emphasizes that the employer may not delay designating leave as FMLA-qualifying, even if the employee would prefer that the employer delay the designation. This means that an employer cannot treat the PTO as non-FMLA if it is being used as the initial part of the leave.

Now that we have outed ourselves as FMLA-nerds, here is why this is so important. In a recent case, a federal judge doubled the lost wages and benefits due to an employee for an FMLA violation. The judge did so under the FMLA’s liquidated damages provision, finding the employer acted in bad faith in terminating a hospitalized employee because she did not follow company policy by calling out herself. Instead, her son called for her, 3 days in a row, until her supervisor told him he could not call on her behalf. The VP of HR agreed and terminated. They didn’t know that the FMLA regs provide: Notice may be given by the employee’s spokesperson…if the employee is unable to do so personally. In order to avoid the double damages in an FMLA lawsuit, an employer must show that it acted in good faith and had reasonable grounds to believe that it was in compliance. The court said that among the ways of doing so, an employer may advance its good faith and reasonable grounds…by demonstrating that it sought legal advice about its obligations under the FMLA. Apparently, the employer, in that case, didn’t know any FMLA-nerds. Fortunately, you do.